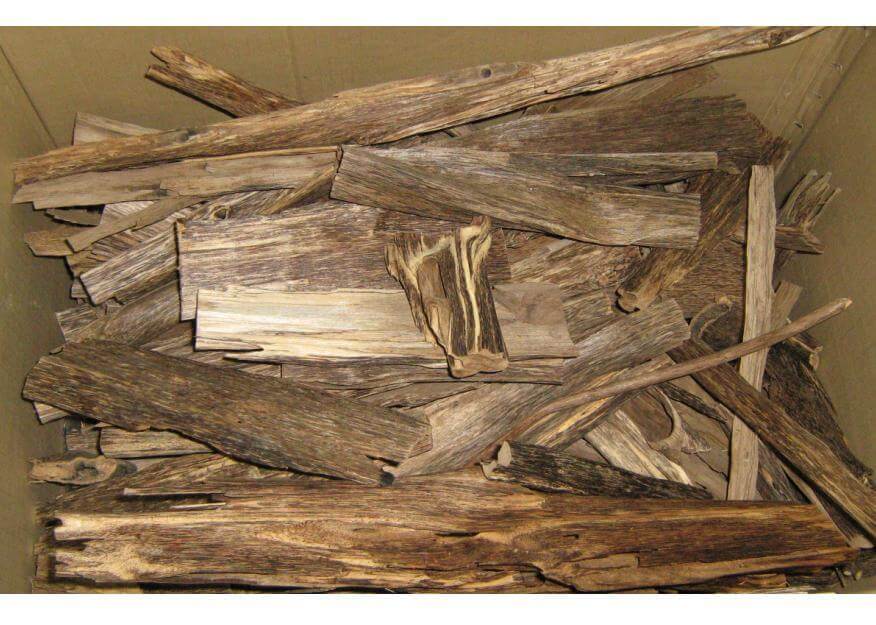 Agarwood trade has been going on for thousands of years. Today, the Middle East is the largest consumer of agarwood products. The oil is a principal ingredient in 400 fragrances. Oudh wood chips are used in rosary beads, necklaces, incense, powders, and green tea. Incense is used to perfume clothes before prayer, and wood chips are burned to welcome and honor guests. Efforts to create a synthetic substitute for oudh have been unsuccessful. Thus, authentic oudh continues to attract high prices and high demand.

The United Arab Emirates often serves as a distribution center between the Middle East, India, Indonesia, Malaysia, Hong Kong, Singapore, Taiwan, Vietnam, and Cambodia. One Saudi Arabian agarwood retailer has more than 500 specialty retail stores in 17 countries, with a customer base of 600,000. This retailer imports five metric tons of unprocessed agarwood annually.

The agarwood trade volume of unprocessed agarwood has been estimated at 6,843 metric tons for 1993–2003 in Taiwan (www.gaharuonline.com, quoting TRAFFIC, a wildlife non-government organization recognized by the International Union for Conservation of Nature, and Convention on International Trade in Endangered Species of Wild Fauna and Flora sources). Much of this wood, which varies in price from US $3,000 to $30,000 per kilogram, is used for Chinese medicine.

Other uses, such as for high-quality ornamental sculptures, can reach $100,000 per kilogram. In Japan and Korea, incense sticks are made from agarwood. Processed oil prices range from $7,000 to $61,000 per liter. The 1991–1998 Japanese custom department figures estimate that about 34 metric tons of unprocessed agarwood are imported annually, totaling 277,396 kilograms.

Unprocessed agarwood pieces range from $320 to $22,700 per kilogram, with the highest quality fetching between $9,000 and $272,000 per kilogram. The key port for this trade is Hong Kong, which in English means “Fragrant Harbor,” indicating the historical importance of this port as an incense-trading hub.

Hydro, steam, and carbon dioxide distillation extract the essential oil from the heartwood. An 80-year-old tree can produce just 6–9 kilograms of agarwood oil. Steam distillation is the most popular extraction mode: the wood is first converted into chips and then cooked in a still to remove the oil. The first distillate is the purest and most expensive. The oil is kept pure or blended with cheaper essential oils like carnation, sandalwood, geranium, and alcohol.

Aristotle was aware that the wound-healing property of agarwood could be invaluable to soldiers in battle, so he advised his student Alexander the Great to conquer lands rich in agarwood trees. Dioscorides mentioned aloes in his encyclopedia of herbs De Materia Medica (c. 75 BC). The resin was believed to have antidepressant, antimicrobial, and aphrodisiac properties.

It was also used to treat gout, paralysis, and rheumatism. Its carminative property treats diarrhea, vomiting, and stomach aches. It is considered particularly effective in soothing the nerves and reducing anxiety. Animal research trials have indicated that the plant possesses anticancer and antidepressant properties.

According to Traditional Chinese Medicine, agarwood is rated among the top ten Chinese herbal medicines. It works on three meridians: the kidney, spleen, and stomach. In ancient China, the plant was used to treat digestive problems. It was considered to be an antioxidant. In combination with Radix aucklandiae root, Lindera strychnifolia root, immature bitter orange, and other herbs, it was used to promote the circulation of qi (life force). Qi flows through 12 meridians on each side of the human body. Meridians can be equated to a three-dimensional energy flow network connecting various organs and human body pressure points.

In Tibetan medicine, agarwood oil is believed to have a calming influence. Black aloeswood is regarded as a minor tranquilizer. When combined with cloves, Diospyrus kaki (oriental persimmon) calyx, round cardamom seed, and other drugs, it treats colds, vomiting, and hiccups.

In Ayurvedic medicine, agarwood heartwood is used in popular formulas such as Chavanprasha, Arimedadi Taila, and Mahanarin Taila. These formulae are used as a cardiac tonic, general tonic, carminative, refrigerant, and to treat sexual disorders.

Ayurveda practitioners regard the oil as beneficial in relieving ailments of the chest, head, and skin. There are references to its medicinal use in the Sushruta Samhita. Unani medicine is used as a stimulant, laxative, and aphrodisiac. In Japan, the ancient application of agarwood chips for relaxation, meditation, and physical wellness is common in the Kou-Dou incense ceremony.