Herbs in the Holy Anointing Oil 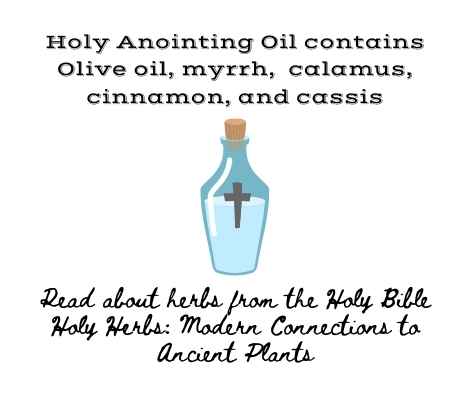 The specific composition in traditional literature related to the Old Testament is as follows: myrrh, 500 shekels (about 1 gallon); cinnamon, 250 shekels; calamus, 250 shekels; cassia, 500 shekels; olive oil, one hin (about 1⅓ gallons). Exodus and other Old Testament verses have used the words “sweet” and “pure” when referring to these spices. Scholars have interpreted sweet to mean fragrant and pure to mean high clarity and quality.

These plants contain gums or resins, which help protect the plant body. The gums and resins exude from the stems, branches, and rhizome (underground stem) when the plant is injured, naturally or artificially. They seal the wound and prevent pathogenic bacteria and fungi entry as they harden.

Calamus is interpreted to come from multiple sources. One such is the Acorus calamus plant. It is distributed across many parts of the globe and has many common names: sweet cinnamon, sweet cane, myrtle grass, myrtle flag, and myrtle root. According to the International Union for Conservation of Nature and Natural Resources, the plant is native to India, China, Japan, Korea, South-eastern and Central Asia, Mongolia, Russia, and North America. It grows close to streams, lakes, and other water bodies.

Cinnamon is one of the more famous spices from Biblical and pre-Biblical times. It originates from several species, including Cinnamomum zeylanicum syn in the Family Lauraceae. Cinnamomum brumannii, Cinnamomum cassia, and Cinnamomum loureirii, classified as cassias, grow in Indonesia, China, and Vietnam, respectively.

Cinnamon and cassia have similar aromatic properties, but they differ in flavor, eugenol content, and the look and texture of the bark. Cinnamon is milder, with less eugenol and a thinner, light-colored bark. Cinnamon is more expensive compared to cassia.

Olive cultivation perhaps began about 8,000 years ago, at the end of the Neolithic period, in the Aegean region and Syria. It was often done after consulting the stars, based on the belief that good harvests and the stars’ position are linked. Olives were then gathered by beating the tree with rods and hand harvesting.

Read more on Herbs in the Holy Anointing Oil and other Biblical herbs in: