Is hyssop the same as lavender? 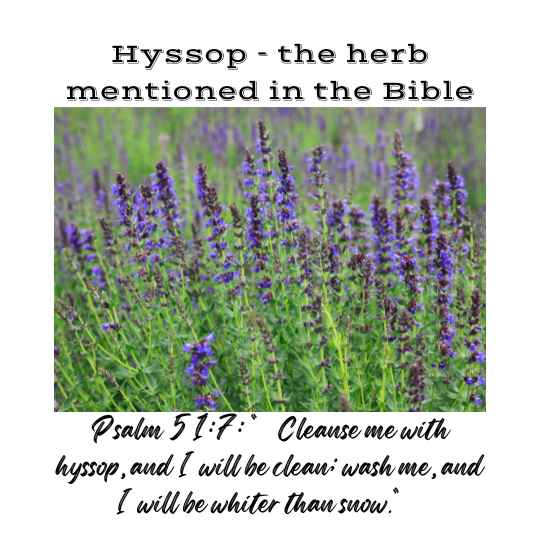 As with other Biblical plants, the botanical source of hyssop is shrouded in debate. The Bible mentions hyssop many times (Leviticus 14:1–7). A brush made of hyssop branches was used to mark the houses of the Jews with lamb’s blood to protect them from the impending plague. David mentions the plant in Psalm 51:7: “Cleanse me with hyssop, and I will be clean; wash me, and I will be whiter than snow.” There are references to herb in the burning of the heifer (Numbers 19:6) and for sprinkling on a dead person (Numbers 19:18). In 1 Kings 4:33, Solomon “treated about trees from the cedar that is in Libanus [Lebanon], unto the hyssop that cometh out of the wall.”

Rabbi Saada Gaon (882–942 AD) and Maimonides (1155–1204 AD) believed that Marjarano syriaca syn origanum is the true hyssop because it is identical to the Israeli za’atar. In Arabic, za’atar refers to marjoram and other genera in its family with similar scents and tastes (e.g., thyme, satureja, savory), often used as marjoram substitutes. It is also called ezov in Hebrew and Biblical herb in English.

Fleischer et al. (1988) concluded that Biblical hyssop was not Hyssopus officinalis, or azob in Greek, which means “holy herb.” Dioscorides wrote that hyssop was used to clean temples, similar to the Biblical descriptions of its use in Leviticus 14:1–7, 33–53, and Psalm 51:7.

On the other hand, the Encyclopedia Britannica (2015) states, “Ezov, the hyssop of the Bible, a wall-growing plant used in ritual cleansing of lepers, is not Hyssopus officinalis … it may have been a species of caper or savory.” Capparis spinosa is a caper found in the region. Stanley (2001), Balfour (1897), and several other authors support that the plant was C. spinosa.

My take is that the herb mentioned in the Bible is either Marjarano syriaca or Hyssopus officinalis; it is unlikely to be lavender.

You can check here to learn more about hyssop and other plants mentioned in the Bible.