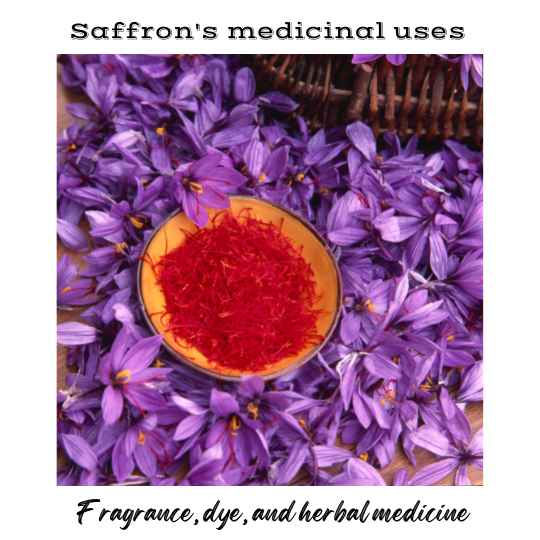 Saffron medicinal properties have been extensively studied. Crocus sativus (saffron) is a small flowering herb that is 15 to 30 centimeters tall and distributed across central Asia, Iran, the Mediterranean, Europe, Asia (largely Kashmir and Afghanistan), northern Africa, and North America in areas with hot, dry summers and cold winters. It is a perennial herb unknown in the wild and has been cultivated for over 3,000 years. It is believed to be a mutant of the wild C. cartwrightianus of the Iridaceae family. C. sativus is a triploid. Plants grow 20–30 centimeters tall. The key constituents of the plant are safranal, crocin, carotenoids, glycoside forms, terpene derivatives, anthocyanins, flavonoids, the vitamins riboflavin and thiamine, amino acids, proteins, and starch.

Its flowers do not produce fertile seeds, so propagation is done with corms or bulbs, which lie beneath the surface—these corms, which are poisonous to animals, average approximately 0.1 meters in size. Large corms tend to yield more flowers and, thus, more saffron. Shoots and blue flowers emanate from the center of the corm. A single corm can pay saffron for 4–12 years. The plant does not require much water. In the Khorasan area of Iran, the plantations are irrigated, whereas Kashmiri plantations are mostly rain-fed. The cultivation area is plowed and weeded regularly until the picking cycle lasts four days. Flowers are picked by hand; the plants wither in summer as bulbs go dormant. The stamens and styles are removed and placed on a mesh over a coal or wood fire to dry, which produces the aromatic saffron spice. A hectare of saffron flowers can yield up to 25 kilograms, but it takes approximately 150,000 to produce 1 kilogram of saffron. The FAO estimates that saffron requires 200 person-days per hectare for collection and management. Saffron generally does not store well for longer than twelve months. Its production is not cost-effective in areas with high labor costs, like Spain, France, Italy, the United Kingdom, and Switzerland.

According to FAO statistics, Iran is the largest producer and exporter of saffron, with 79,394 hectares in the Khorasan, Fars, and Kerman provinces of Iran devoted to saffron cultivation. This is partly because U.S. oil sanctions against Iran have shifted focus from oil to non-oil exports like saffron. The industry is popular among local communities. The Iranian economic model emphasizes sharing profits with growers and collectors, who receive 65 percent of the end-consumer price as a wage. In the Iranian saffron-producing areas, saffron accounts for up to 70 percent of household income. These regions annually produce about 239 metric tons of saffron. The FAO estimates that the total value of 2012 Iranian saffron exports (130 metric tons) was U.S. $419 million. Other major producers of saffron are Greece (5.7 metric tons annually), Morocco (2.3 metric tons annually), and India (2.3 metric tons annually), followed by Turkmenistan, Italy, Switzerland, England, France, the United States, and Spain.

Iran exports 84 percent of its saffron, nearly half of which goes to Spain, the world’s major reprocessing and packaging center for saffron. Reprocessing includes cleaning, sorting, drying, and packaging. FAO estimates Spain’s saffron-processing capacity to be 220 metric tons per annum. Spain, Italy, and the United States are the largest importers of saffron. Saffron is an expensive spice. Thus, adulteration with petals and flowers, such as safflower and marigold, is common. It is cultivated for its fragrance, dye, and culinary uses. It is used in Italian, Greek, and Arabic confections, desserts, and curries.

The plant has been used as medicine across all herbal medicinal systems. Traditionally, the saffron’s medicinal uses included its use to ease stomach cramps, flatulence, respiratory ailments, blood disorders, heart diseases, and as an aphrodisiac. It is a folk remedy for headaches and colds and has antidiarrheal and antidysentery properties. It is useful in treating scanty menstruation and poor seminal mobility. It is one of the 770 medicinal plants mentioned in the Sushruta Samhita. In Ayurveda, saffron’s medicinal uses are: to improve skin tone and reduce acne in skin creams, herbal facial masks, and wound healing. When mixed with sandalwood paste, it cools the skin. Mediterraneans and Mesopotamians associated saffron with fertility and sexual potency. Hippocrates and Galen’s mention using saffron to improve digestion, reduce flatulence and colic, and calm the nerves of adults and children. Avicenna in Book II of Canon of Medicine (al-Qanun fi al-tib) describes various medicinal uses of saffron, including as an antidepressant, hypnotic, anti-inflammatory, hepatoprotective, bronchodilator, aphrodisiac, labor inducer, and emmenagogue. Most of these effects have been studied in modern pharmacology and are well documented. In Traditional Chinese Medicine, saffron is claimed to be useful in conditions related to the heart and liver. It invigorates blood supply, releases toxins, and relieves high fevers and diseases caused by pathogenic heat. Saffron is also used as an herbal cure for colds and coughs and in dentistry. The pharmacological data on saffron and its constituents, including crocin, crocetin, and safranal, are similar to those in Avicenna’s monograph (Phytotherapy Research., 2013, Hosseinzadeh, Nassiri-Asl).

Crocus sativus is known to have antihypertensive, anticonvulsant, antitussive, antigenotoxic, antioxidant, cytotoxic, anxiolytic, antidepressant, aphrodisiac, antinociceptive, anti-inflammatory, and relaxant properties. Modaghegh et al. (2008) conducted trials on ten people who were administered saffron tablets and showed a reduction in both high systolic and arterial blood pressure. It also improves memory, learning, and sleep and increases blood flow in the retina and choroid. In high doses, it has a narcotic effect. C. sativus may alleviate symptoms of premenstrual syndrome, according to a 2008 study published in the British Journal of Obstetrics and Gynecology. After taking C. sativus twice a day during two menstrual cycles, the experiment group showed great improvement in premenstrual symptoms compared to those assigned a placebo. However, because it is used to break blood clots, those on blood-thinning medications or women who experience heavy menstruation should avoid saffron altogether. A New York Langone Medical center publication states that trials to validate saffron’s ability to treat depression indicate positive results. The plant also shows promise in the treatment of cancer, reduction of cholesterol, protection against side effects of cisplatin, and enhancing mental function.