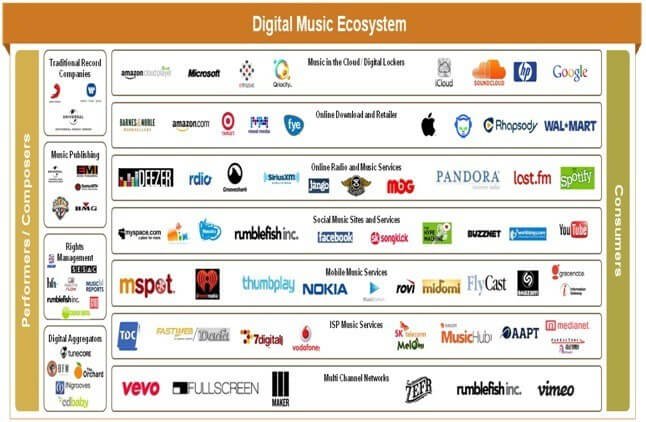 This E-marketplace for artists article is based on an interview with a Founder of such a venture. The startup is Europe based.

The crowds of fans at a music fest berserk with joy when they watch a live performance of their favorite artist. Many fans themselves are musicians and singers. They draw inspiration from these performances. They adulate the performers. Some aspire to take their place in the future. But just like book best sellers, top performer numbers are few.

There are millions of compositions available on the internet. The consumer is spoilt for choice. Search, though, is often restricted to top numbers who not just have great content but have marketed themselves well. Great music continues to lie undiscovered, unseen, and unheard. One could say it is tougher for a musician and artist than a writer to succeed.

The music industry is huge. It will reach $15 billion this year, 2016 (IFPI, 2016). Digital revenues account for forty-five percent of total revenues compared to 39 percent for physical sales.   Live performances and events are often the mainstays of income for artists with music labels digitally accessible to fans for free.

Given the industry’s size, a music business opportunity exists for individuals. How many can leverage this opportunity depends on several factors, many of which are common to other businesses. They relate to business strategy, business process, brand building, and marketing.

In a world where content is king and technology is disrupting every aspect of life and society, I was curious to know how the music industry was coping with this change. I spoke to Riccardo Torriani, Founder of a startup focusing on music and artists. Torriani has named his venture the Internet of Artists. He has incorporated the company in the UK, one of the world’s largest music markets. Torriani has created an e-marketplace for artists.

Unlike a writer, a musician and artist require a complete ecosystem. To start with, musicians need a place to practice. “Music rehearsal can be quite noisy, and neighbors would hate a musician practicing at home,” Ricardo explained.

The Internet of Artists – e-marketplace for artists is an end-to-end platform for musicians, fans, and artists. Riccardo has phased the rollout of his venture. The first module will be rolled out in October 2016. Final touches pre-launch are underway. This module enables access to artists and musicians, a full complement of the music ecosystem. They have called this module – MyM Vision.

This module allows artists and musicians to access recording studios, rehearsing locations, performance venues like pubs and restaurants, and music training schools. Registration to the module is free. Musicians and artists can upload a demo reel of their work.

Musicians hunt for an appropriate venue for rehearsing, recording, and playing, which is often both time-consuming and frustrating. Now they will be able to book and use this infrastructure through MyM. Music schools, too, will be listed on the platform.

Unlike other tech startups, Internet of Artists is a brick-and-mortar facilities provider. Ricardo, a musician and music lover, has used his hands-on experience in music making while designing the portfolio of services on offer on MyM. The e-marketplace for artists platform is designed to be meritocratic. Fans and consumers of music infrastructure will be able to rate each service and make independent choices.

As the first module, MyM Vision rolls out, work on the second module, which has been named MYM Labs, will be put in motion. A full range of devices will be provided here. This includes cameras, sensors, tools for interaction, streaming music boxes, cross-media applications, and augmented reality modules for promotion and streaming. Riccardo intends to provide the state of the art equipment to the art ecosystem under this module.

The final stage in developing a full ecosystem for artists will be the launch of MyM Venue. No date is as yet set for the launch of this module. As the name suggests, through this module, artists can gain access to venues. These are planned to be set up in the UK, Europe, the US, and Japan.

The Internet of Artists was incorporated in the UK in September 2015. In one year, the company has grown and was said to have a staff of 20 people. The Founders bootstrapped the investment with their funds to kick-start the venture. The first round of funding has been secured, and a second round is under closure. The venture is getting a thumbs-up from investors.

I found the Internet of Artists concept interesting from the artist’s standpoint. There was a need for a platform where all music-making and display complements could become available. As the system rolls out, this will become a reality.

Another challenge for an artist and musician is discovery. There is so much content available on the internet. The choice is so overwhelming that it becomes difficult for fans and music lovers to sift through this mountain of content. Of course, things will become easier as analytics and artificial intelligence tools become better.

In the future, if the startup can support its members with digital marketing support, this can then emerge truly, as an end-to-end service platform. The way the music marketplace is conceptualized and service quality is good. Music lovers and artists should flock in to register.

The challenge will be discoverability and marketing. One of the Founders is an expert in digital strategy and marketing; his role will be critical. It is an interesting innovation in music and art, and it will be good to track its performance as we go along.