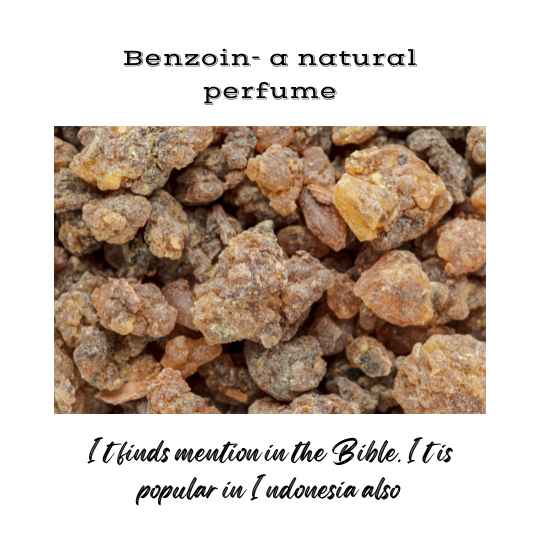 Benzoin – a natural perfume, is mentioned in the Bible. In the Bible, there are references to onycha, believed to be benzoin. In aromatherapy, benzoin has a calming influence on the body but can cause contact dermatitis. It is a mild stimulant and antiseptic, and it is used to treat skin irritations such as itchiness, dryness, and redness after blending it with oil.

Papyrus records from ancient Egypt indicate that benzoin resin was mixed with other aromatic resins, like pine, juniper, cypress, galbanum, and labdanum, to create an aromatic powder that Egyptian dancers applied to their heads.

Benzoin, a natural perfume, is also used as a fragrance by Indonesian Muslims. In the Middle East, an incense of scented wood chips called Bakhoor contains benzoin. Bakhoor is used on coal fires to produce a powerful aroma and is part of the ancient Arabic tribal tradition of living outdoors. Benzoin is also used as incense in Orthodox Christian and Greek Christian churches.

In Indonesia, the product is sold as frankincense, although true frankincense comes from Boswellia species.

A 2001 Food and Agriculture Organisation (FAO) study of Indonesian export data estimates the annual export of Sumatra benzoin at 1,000 metric tonnes. Most Styrax benzoin (the tree from which the resin is extracted) resin is used by the cosmetic and food industries.

Resin, which yields benzoin- the natural perfume- is extracted by making a deep incision with an axe on the tree’s trunk when it reaches seven years of age. The wound must be deep enough to expose the cambium canals. The sap is then dried for about four weeks, and the tears are collected and packed in tins or boxes. The first three years of tapping yield the best resin, though the tree continues to yield benzoin for another 10–12 years. At the end of the tree’s life, it is cut down, and its resin is scraped off.

You can learn more about the tree, its uses in history, and today here.