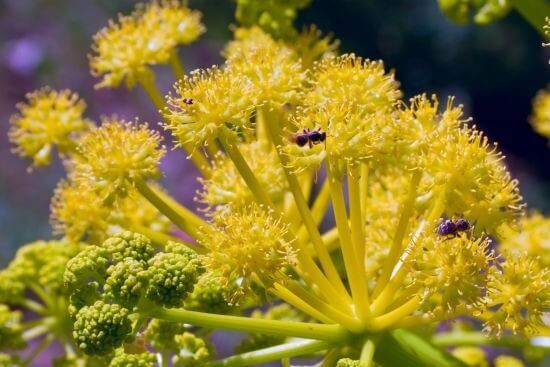 Galbanum incense is one of the four essential ingredients of the Holy Incense mentioned in Exodus 30:34 and Ecclesiastes 24:14–15. Ketoret, the Jewish Holy Incense, was one of the ingredients burned in the Tabernacle in the 1st and 2nd Jewish Temple at Jerusalem.

Ferula galbaniflua syn F gummosa is found in Iran, southern Russia, Afghanistan, and Turkey. It is a perennial that grows to a height of one meter. The plant bears umbelliferus yellow flowers arranged in a panicle. The gum resin is extracted by wounding the root or lower part of the stem. The resin that oozes out of the wound is collected around two weeks after wounding, by which time the exudates have hardened into a crystalline substance. The chemical constituents of galbanum are monoterpenes (α and β pinene), sabinene, limonene, undecatriene, and pyrazines.

The current widely accepted source of galbanum incense is Ferula gummosa, which is synonymous with Ferula galbaniflua, though other species also yield galbanum. It has a sharp and unpleasant smell, hence its nickname “devil’s dung” in English, which makes one wonder about its selection for use in ancient incense.

Galbanum was likely a fixative in ancient perfumes, and it is still used as such today. Fixatives do not need to be sweet-smelling. Fixatives instead enhance and prolong the scent of perfumes. The plant that produces galbanum has similar chemical compounds to the pungent asafetida, a spice popular in Indian cuisine.

Nomads of southwestern Iran have traditionally used the plant as an antidiarrheal. Ancient Iranian medical literature refers to it as an anticonvulsant, antispasmodic, expectorant, and wound treatment. These treatments have been studied in trials on rats but have not been validated in clinical trials.

The antibacterial action of the resin was studied, but little activity was detected. Scientists have also studied the spasmolytic action of the essential oil against part of the intestine. In traditional Iranian medicine, an oleo-gum-resin obtained from F. gummosa is popular for treating various disorders, including stomach ache, cholera, diarrhea, epilepsy, inflammation, and pain. In a review of the species conducted by Nabavi et al. (2012) in Iran, the anti-oxidant action of the gum was studied and validated.