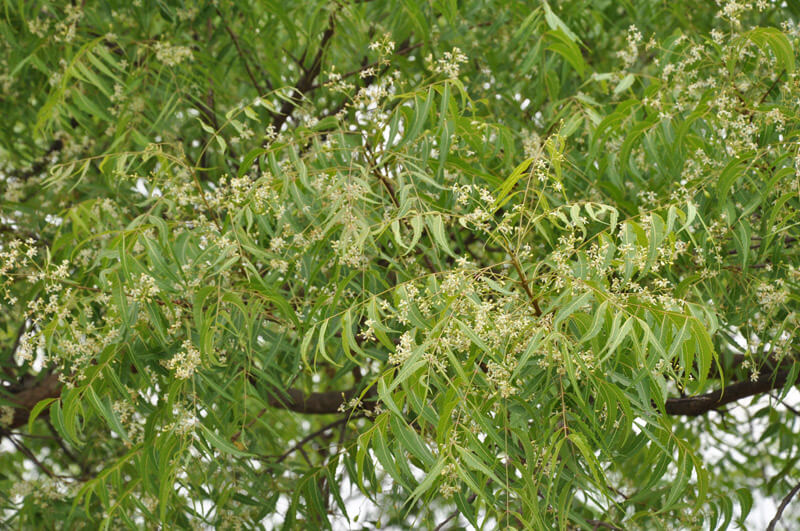 Neem tree botanical name – Azadirachta indica grows in more than 50 tropical countries’ dry deciduous areas. Neem was introduced a century ago, first in Africa and then in Latin America. The tree can grow up to 20 meters in height.

In the Asia Pacific and the African regions, neem is considered invasive species. In South Asia, it is observed to thrive in semi-arid ecological zones. The leaves of the branches are good fodder for goats, sheep, and even cattle. The palatability of neem to cattle, goats, and sheep makes the species highly susceptible to biotic damage from wild and domesticated grazing animals.

It is famous for its medicinal properties. The earliest archaeological reference available on neem is seen on pottery from the Indus Valley Civilization (2600-1800 BC) period. An amulet recovered from Chanu Dora in Harappa, now in Pakistan, shows a man kneeling before what looks like a neem tree.

According to Hindu mythology, the gods and demons churned the oceans together until a pot of nectar of immortality (amrit) emerged from the depth of the mythical ocean. A fight ensues between the two sides to secure this pot. In this jostling, nectar spilled over from the pot and dropped onto the earth. The neem tree emerged at that place. (I notice a similarity between this story and the Greek tale describing the mythical origin of the olive.)

Neem tree health benefits have been widely studied. Azadirachta indica (common name -Neem) is one of the most researched trees worldwide, with over 2,000 clinical trials and studies.

The plant treats various skin diseases like scabies, leprosy, and skin ulcers. It is also used to treat eye disorders, a bloody nose, an upset stomach, loss of appetite, cardiovascular issues, intestinal issues, fever, gum, malaria, etc. The fruit helps treat hemorrhoids, urinary tract disorders, and intestinal worms. It provides relief from headaches. It is regarded as a mosquito repellent and a diuretic.

Neem tree is prophylactic against multiple infectious diseases like malaria, cholera, diarrhea, etc. The tree is said to be a cleaner of air. The tree’s bark is ground as a paste and applied to heal boils and wounds. Neem has been shown to boost immunity, help purify the blood, and act as a detoxifier. Numerous Ayurvedic medicines containing neem have been manufactured and sold in the Indian market.

The ripe fruit is sweet and helps keep the body free of infections. Its diverse medicinal properties have led to the tree being christened “The Village Pharmacy.” The tree has a place in the Indian Pharmacopeia.

Many scientists have studied the anti-malarial potential of the plant. Preliminary results indicate that the species can be used in vector control (Awofeso, 2011; Bedri et al., 2013; and Habluetzel et al.,2009). Experiments for Alzheimer’s disease control conducted on rats have shown positive results (Raghavendra et al., 2013).

Asif et al. (2013) study shows that the species possesses spermicidal potential. Similar properties were observed in a study conducted on albino rats (Aladakatti et al., 2006). The study by Khan et al. (2013) indicates that the plant has immunomodulatory and anti-cancerous properties.

Experiments on rats with induced hepatotoxicity and genotoxicity proved its chemoprotective effects (Singh et al., 2012). A fractionated neem-leaf extract sold under the name IRAB/IRACARP in Nigeria is reported to be effective against malaria, HIV/AIDS, and cancer (Anyaehie, 2009).

I have provided an overview of the scientific support for the medicinal properties of this plant. To know more about neem tree health benefits, you can read here.