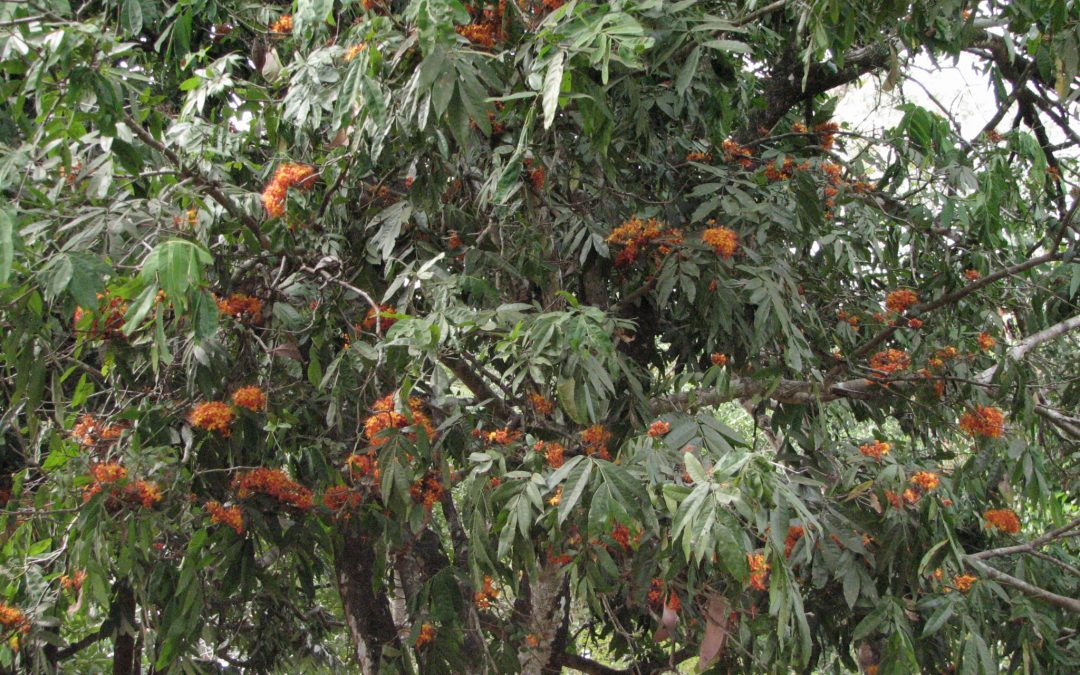 The sacred tree Ashoka has substantial references in ancient Indian texts. Ashoka (botanical name Saraca asoca) is another of the sacred plants of Hindus, representing the Hindu god of Love, Kamadeva. The god and the tree are worshipped every year on December 27. It is no wonder that there is a lot of folklore surrounding this tree.

Hindus believe that the touch of the Ashoka tree relieves a person of worries—one of the Sanskrit names for the species is nasty-Soka or “reliever of worries.” Padma Purana states, “The planting of the Asoka tree leads to the destruction of all sorrows.” In his encyclopedic work Vrhat Samhita, Varaha Mitra says that planting Asoka, siris (Albizzia lebbek), etc., in the garden or the house brings welfare to the household.

Mythical stories about Ashoka abound. One explains how the sacred tree Ashoka tree starts blooming at the touch of the female feet, which is attributed to the name padaghatadasoka. Kalidasa, the poet who lived in the 4th century AD, describes the dance of Malvika, the courtesan under an Ashoka tree, in his work Maavikagnimitram.

In Buddhism, the Ashoka tree is also associated with the Buddha’s incarnations. Xuan Zhang, a Chinese visitor to India in the 7th century AD, claims that the Buddha was born under an Ashoka tree. However, this is disputed by others who say that the birth happened under a sala tree (Shorea robusta). Indeed, if the Buddha’s place of birth was Lumbini in Nepal, then the latter opinion is more possible as it is a region that abounds in sala trees and not Ashoka.

The 2nd century BC stone railing discovered at Bharhut has a carving that depicts a sacred tree Ashoka tree intertwined with the figure of a goddess. Figures with a similar association of goddesses with the Ashoka tree are interpreted as the association of the tree with spirits of fertility spirits (Biswas and Debnath, 1972).

Additional reading on Ashoka – its botany and medicinal properties, read the section on the tree in Asian herbs.