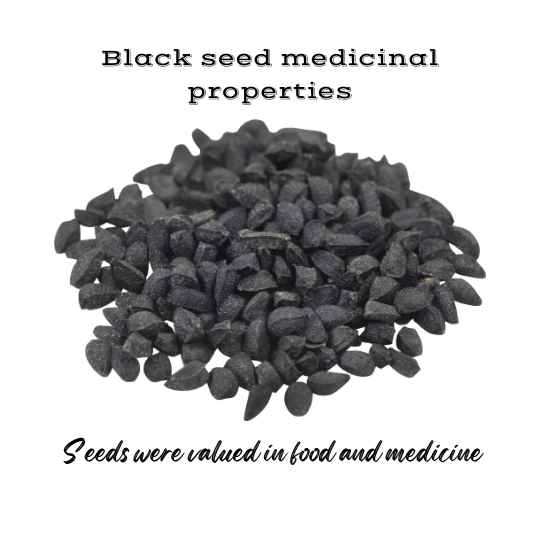 Black seeds are a popular spice across the globe whose Biblical origins are unclear. Reviews of papers and ancient literature suggest Bunium bulbocastanum and Nigella sativa. B. bulbocastanum is the botanical name for black cumin. This species is native to northern Africa and parts of southern Europe. It is a perennial herb that grows to a height of just over half a meter. The tubers are quite small. The roots and leaves can be eaten cooked and raw. When cooked, it has a sweet chestnut flavor. The seed and flowers of the plant are used as a food flavor and substitute for cumin. The leaves are used as a garnish and fl, savoring much like parsley.

Nigella sativa (“black cumin species found in southern Asia, the Arabian Peninsula, and Europe. It is an annual herb that grows to a height of less than one foot. The herb bears white to light yellow delicate flowers. N. sativa seeds are used across India, the Middle East, and the Mediterranean region in cooking in traditional medicine.

In India, black cumin or black seed is used in cuisine and medicine from N. sativa. Moreover, B. bulbocastanum is restricted to the northern state of Kashmir, and its availability across southern Asia is subject to production and supply constraints. According to hadith, the Prophet Muhammad is believed to have said: “In the black seed is healing for every disease except death” (Sahih Bukhari). This indicates that the spice was available locally in Arabia.

Black cumin seeds, also known as black seeds, have been known to the Egyptians, Assyrians, Greeks, Jews, Romans, Indians, and northern Africans since antiquity. Archaeologists found a bottle of black cumin oil in the tomb of Tutankhamun (c. 1350–1323 BC), which is currently displayed at the Egyptian museum in Cairo. Egyptian papyri show physicians frequently prescribed seeds after extravagant feasts to calm upset stomachs. They also used the seeds to treat headaches, toothaches, colds, and infections. Queen Nefertiti (c. 1370–1330 BC), the chief spouse of Pharaoh Akhenaten, was believed to use black cumin oil to strengthen and bring luster to her hair and nails. Cleopatra also to have used the oil for health and beauty. The Assyrians mused the use of black cumin seeds to treat stomach ailments and skin conditions like itching, rashes, sores, and herpes. They used it externally on the eyes, ears, and mouth. It was used as a culinary spice too. The use and importance of black cumin, also called fitches in the ancient Mediterranean and western Asia, is apparent from Isaiah 28:27 and Ezekiel 4:9 in the Bible.

Cumin was exported from Egypt to Imperial Rome, where it was used in medicine and food. The spicy seed was used to preserve meat and flavor food such as curries, pastries, and cheese. The Roman food writer Apicius wrote a recipe for a pear omelet that uses black cumin as a spice. In India and Afghanistan, black cumin seeds are traditional toppings bread breads. When roasted, the seeds add aromatic flavor to curries, biryani, pickles, and masalas. In northern Africa, the seeds are used in couscous and ground meat dishes. It is an ingredient of the popular spice blend Baharat in the Arabian region. Throughout the Middle, spice is added to cakes, confections, alcoholic beverages, scents, and candies. Cooking oil is also produced from the seed. An infusion made from crushed seed steeped in boiled water is quite popular.