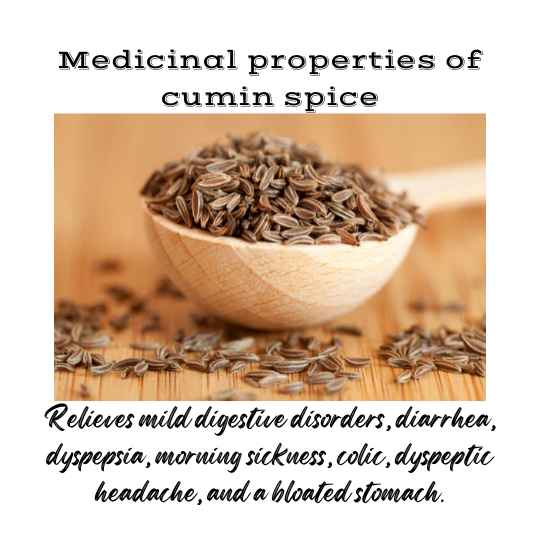 Cumin spice medicinal properties are in the seeds, which are carminative, antispasmodic, antibacterial, astringent, antimicrobial, antidiabetic, anti-inflammatory, and analgesic. Cumin is an emmenagogue and galactogogue. It relieves mild digestive disorders, diarrhea, dyspepsia, morning sickness, colic, dyspeptic headache, and a bloated stomach. The hepatoprotective property of the plant has also been indicated in animal trials.

Cumin spice is a popular folk medicine in India to ease flatulence. In the Middle East, a decoction of cumin seeds mixed with ginger, basil, and honey is a remedy for cough, cold, and flu. In India, black pepper is added to this mix. Mixing cumin with dried mint leaves helps clear bronchial and nasal passageways. In Arabia, cumin is mixed with black pepper and honey as an aphrodisiac. In Ayurveda, a decoction of cumin seeds in water is given to stimulate the appetite and as a general nutritive tonic to improve heart health and cognitive function and nourish the eyes. In Traditional Chinese Medicine, cumin is often integrated into medicated teas to treat cough and fever or in food to aid digestion.

Whole, dried cumin seeds may be chewed as a remedy for nausea or dizziness and as a breath freshener. Tisanes made from cumin have also been employed to soothe muscular spasms. In the past, it was used to treat epilepsy and tremors. A poultice or a plaster can be applied to bruises, swellings, stitches, and sore muscles to facilitate healing and prevent infection. Applied topically, it may help fight fungal diseases.

Ancient Indians and Egyptians once employed it as a remedy for headaches and mental and physical exhaustion. When combined with spices like cinnamon and resinous gums like myrrh or frankincense, it was considered a potent and enervating aphrodisiac. It is believed that excessive use of cumin could harm pregnant women and lead to miscarriage, nausea, and mild stomach upsets. Cumin has been used as a hair rinse, and if first steeped in vinegar, it is said to help fight dandruff, darken and thicken hair, and encourage hair growth. Whole crushed cumin seeds may be macerated in a base oil and applied as a general analgesic, rubefacient, and disinfectant. Spent cumin may be added to food to improve digestibility and nutrient composition (Milan et al., 2008).

The essential oil of cumin is derived from steam distillation. It can be mixed with natural waxes, esters, or base oils to create salves, balms, ointments, or liniments. In aromatherapy, essential cumin oil may relieve spasms, muscular discomfort, anxiety, nervousness, and stress. Many of its traditionally regarded medicinal properties have been studied. The potential use of cumin seed essential oil against K. pneumonia in vitro has been validated by Derakhshan et al. (2010). The oil was also found to be a potent antimicrobial agent against E. coli strains by Bokaeian et al. (2014). Saboo et al. (2014) found that cumin was a potent antidiarrheal in rats. Jagtap et al. (2010) found that cumin has antidiabetic properties, and Dhandapani et al. (2002) claim that the spice is more effective than glibenclamide in treating diabetes mellitus. The chemo-preventive potential of cumin seeds to modulate carcinogen metabolism has been studied (Gagandeep et al., 2003). Sayyah et al. (2002) found that administering the essential oil at anticonvulsant doses can produce sedation and motor impairment in maximal electroshock and pentylenetetrazole-induced tonic seizures.