Mustard- A Spiritual And Historical Overview 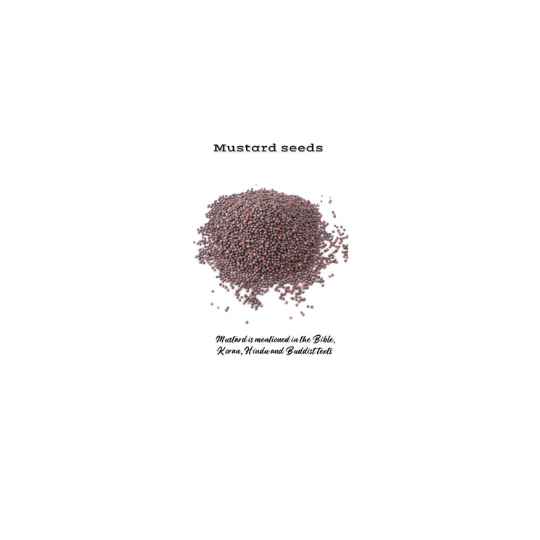 We refer to the relationship between “mustard seeds” and faith” in the Gospel of Matthew and others. Mustard represents the insignificance of the self and the world in the eyes of God. It also means humility.

Then the disciples came to Jesus privately and said, “Why could we not drive it out?” And He said to them, “Because of the littleness of your faith; for truly I say to you, if you have faith the size of a mustard seed, you will say to this mountain, ‘Move from here to there,’ and it will move, and nothing will be impossible to you. “But this kind does not go out except by prayer and fasting.”

Mustard is one of the oldest spices used by humans. According to an allegorical story by Gautama Buddha (c. 563–480 BC), the Buddha asked a grieving mother who lost her only son to bring a handful of mustard seeds from a family that has never lost a child, husband, parent, or friend. When the mother could not find such a family, she realized that death is common to all, and thus she should not be selfish in her grief.

In the Quran, too, God states that the scales of justice on the Day of Judgment will measure even a seed’s weight because God is the most efficient reckoner. Jewish texts compare the knowable universe to the size of a grain of this herb. An intimate connection between the small seed and faith occurs in the Bible, Quranic Hadiths, and Hindu literature.

Mustard seeds have been discovered in the tombs of Pharaohs. They were thought to bring good luck. With the expansion of the Roman Empire, mustard traveled to Gaul, Spain, and England. King Charlemagne introduced the herb in the gardens surrounding the monasteries of Paris, establishing the now-famous mustard industry in France. A 1634 law granted exclusive mustard-production rights to Dijon, now famous for its mustard. In German folklore, brides sewed herb seeds into their dresses to bring them strength in their new home, perhaps because women were treated as subordinate to men, and they got good luck. In northern Europe, the seed was said to keep evil spirits away.

Mustard seed is often used in herbal medicine. Hippocrates used spice in many medicines and poultices. Pythagoras mentions it as a remedy for scorpion stings. The herb was said to increase blood circulation. Mustard plaster helped increase blood flow to inflamed areas and thus hastened to heal. Drawing the blood to the skin’s surface relieves headaches, neuralgia, and spasms. It was thought to be an aphrodisiac in Europe and China.

The seeds are not a frequently allergenic food; however, when taken in sufficiently large doses, it warms the body. Not only taste, but the seed was also believed to have significant health benefits. Mustard relieves toothache, muscle cramps, clogged sinuses, and indigestion. French monks used the herb to treat wounds. A rubefacient poultice provided relief from rheumatic pain. Hot water poured on bruised seeds makes a refreshing bath good for achy feet, colds, and headaches. It has been used to treat alopecia, epilepsy, snakebite, and toothache. The seed is also used internally as a digestive, diuretic, emetic, and tonic. Mustard oil stimulates hair growth, a popular hair oil in rural India. However, direct application of the oil has been known to cause severe irritation.

Holy Herbs: Modern Connections to Ancient Plants has details on this plant and other herbs mentioned in the Bible