Will plant based meats successfully compete against the meat industry? 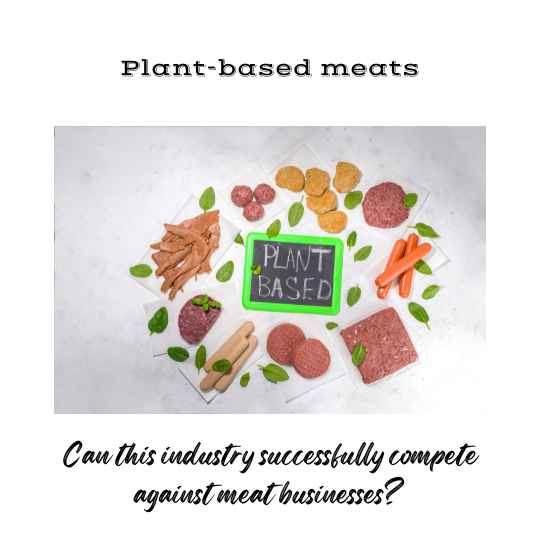 Plant-based meat is a healthy option in a country like America, where most people prefer animal meat. I had just written an article for one of my customers, a US food innovator company that is into plant-based meats. This question extends some of the points mentioned in that article.

But let me begin by presenting some statistics that will help set the stage for my answer to this question.

Americans purchase fresh meat about 27 times per year. Ready-to-eat meat/poultry is extremely popular. 40% of people eat ready-to-eat meat at least once a week as of 2017 (Statistica.com).

According to a 2018 Gallup poll, just 5% of Americans considered themselves vegetarians. Only 2% of older Americans aged 55 and older self-declared vegetarians. The number of vegans in America is just 2%.

Coronary diseases are one of the biggest killers in America. According to the Centers for Disease Control (CDC), every 37 seconds, an American dies of a heart attack. About half (47%) of Americans suffer from high cholesterol, blood pressure, and smoking, three of the commonest risk factors for heart disease. (https://www.cdc.gov/heartdisease/index.htm)

Heart disease is caused by the build-up of plaque (cholesterol deposits) in the arteries impeding blood flow. A heart attack is caused when a clot in an artery blocks the blood flow, starving the heart of nutrition and triggering a heart attack.

Why do Americans, who constitute nearly a third of the global GDP, continue to focus on a meat and meat-based products despite these facts?

The meat industry is truly huge. Remember the USA and China conversation that finally led to the stage 1 trade agreement between these two giant economies? The focus of that conversation was pork, meat, soybean, and food.

There is so much stake in food and meat and so much political and financial capital involved that obvious public health concerns intertwined with vegetarianism don’t stand a chance of coming adequately to the surface.

Votaries of vegetarianism and healthy food don’t stand a chance! The odds stacked against them are huge. The meat industry will prevail for the foreseeable future.