Saffron in history – the spice of Zeus and Jupiter 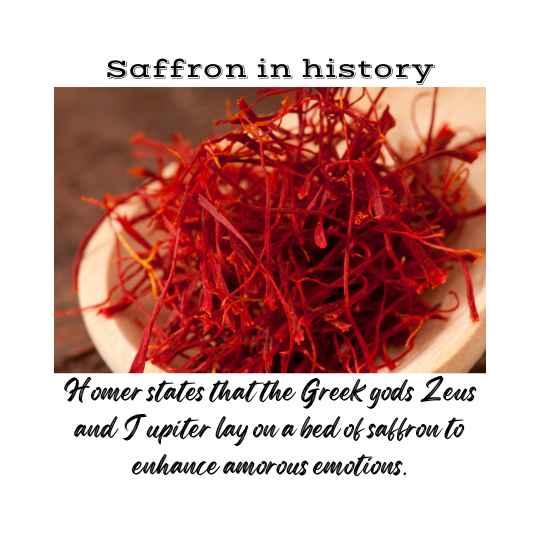 Saffron is perhaps the most expensive and ancient incense known to man. Saffron-based pigments were probably used to make stencil prints on the walls of caves by the earliest cave inhabitants around 30000 BC. But the earliest saffron dye pigments used in paintings probably go back to the Minoan period.

Crocus sativus (saffron) is a small flowering herb that is 15 to 30 centimeters tall and distributed across central Asia, Iran, the Mediterranean, Europe, Asia (largely Kashmir and Afghanistan), Northern Africa, and North America, in areas with hot, dry summers and cold winters. This perennial herb is unknown in the wild and has been cultivated for over 3,000 years.

It is believed to be a mutant of the wild C.cartwrightianus of the Iridaceae family. C. sativus is a triploid; the plant
grows 20–30 centimeters tall. Its key constituents are safranal, crocin, carotenoids, glycoside forms, terpene derivatives, anthocyanins, flavonoids, the vitamins riboflavin and thiamine, amino acids, proteins, and starch.

The flowers do not produce fertile seeds, so propagation is done with corms or bulbs, which lie beneath the surface—these corms, which are poisonous to animals, average approximately 0.1 meters in size. Large corms tend to yield more flowers and, thus, more saffron. Shoots and blue flowers emanate from the center of the corm. A single corm can yield saffron for 4–12 years.

The plant does not require much water. In the Khorasan area of Iran, the plantations are irrigated, whereas Kashmiri plantations are mostly rain-fed. The cultivation area is plowed and weeded regularly until the picking cycle lasts four days. Flowers are picked by hand, and the plants wither in summer as bulbs go dormant. The aromatic saffron spice is produced by removing the stamens and styles and placing them on a mesh over a coal or wood fire to dry.

A hectare of saffron flowers can yield up to 25 kilograms, but it takes approximately 150,000 to produce 1 kilogram of saffron. The FAO estimates that saffron requires 200 person-days per hectare for collection and management. Saffron generally does not store well for longer than twelve months. In areas with high labor costs, like Spain, France, Italy, the United Kingdom, and Switzerland, its production is not cost-effective.

In ancient Roman times, saffron and other aromatic spices were often scattered on pillows and sheets for their aroma and freshness. The spice was mixed with olive oil to scent clothes and hair.

Homer states that the Greek gods Zeus and Jupiter lay on a bed of saffron to enhance amorous emotions. Dioscorides, the Greek physician, mentions the aphrodisiac properties of saffron. It is also cited as a ritual incense in the Orphic mysteries of the cult of Dionysus.

Shen Nung, a ruler in China (c. twenty-seventh or twenty-eighth century BC) and regarded as the father of Chinese medicine, described medicinal uses of more than 300 herbs, including saffron, in one of the earliest of the extant Materia Medica called the Divine Husbandman’s Materia Medica, compiled in the first century AD.

The plant has been used as medicine across all herbal medicinal systems. Traditionally, the species is used for stomach cramps, flatulence, respiratory ailments, blood disorders, heart diseases, and as an aphrodisiac. It is a folk remedy for headaches and colds and has antidiarrheal and antidysentery properties.

And there is much more about saffron. A book on the plant and its uses in ancient and modern times can be written.

Read the section on saffron to learn more about the herb – Holy Herbs: Modern Connections to Ancient Plants.