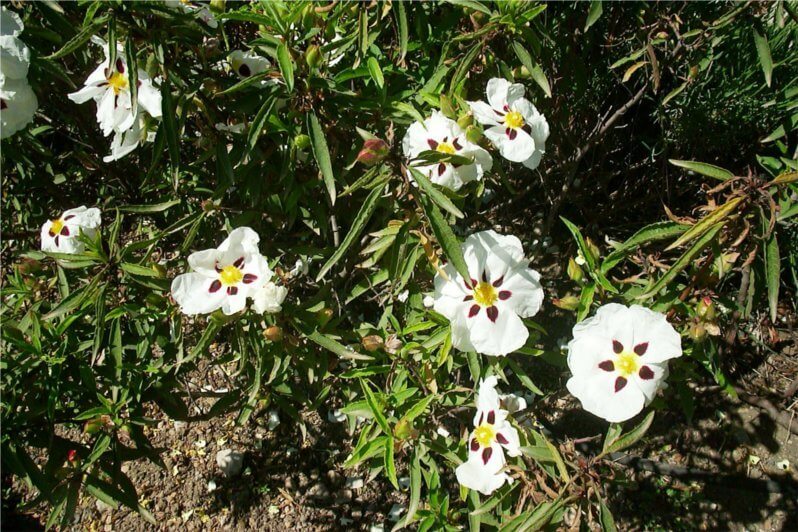 Egyptian pharaohs used the resin from the onycha plant to apply on artificial beards made from goat hair, which was a popular fashion among the elite. The resin was collected with a claw-like comb from the coats of animals who wandered around the shrubs and collected the gum in their hair. Herodotus mentions this in Historia Book Thalia:

Labdanum, which the Arabs call ladanum, is procured in a yet stranger fashion. Found in the most odorous place, it is the sweetest-scented of all substances. It is gathered from the beards of he-goats, where it is found sticking like gum, having come from the bushes on which they browse. It is used in many sorts of unguents, and is what the Arabs burn chiefly as incense. Concerning the spices of Arabia let no more be said. The whole country is scented with the herb and exhales an odor marvelously sweet.

Most modern labdanum is from Spain. The oleoresin is collected directly from the plant and then steam distilled to yield the orange-brown essential oil. The yields of oil are very low, just 0.1 percent. In the early part of the 20th century, a large rake called a ladinsterion was used to collect the oleoresin. The ladinisterion had leather strips to whip the leaves. The resinous sap that exuded from the damaged leaves adhered to the leather and was scraped off with a knife and then formed into bars or balls. Harvesting today is also done manually with the help of a sickle.

Labdanum oil (or cistus oil) is an important fixative in perfume. It is prized for its vegetal mossy aroma and provides leather, musk oil, and ambergris notes. Its ambergris scent is especially valuable, since ambergris is now banned, as it is derived from the endangered sperm whale. The scent is said to retrieve subconscious memories, feelings, and moods. Labdanum was probably onycha and the source of holy incense mentioned in the Bible

The Japanese use labdanum in their traditional Neriko incense mixtures that were used to scent the sleeves of traditional Japanese dresses worn in tea and other ceremonial occasions. Labdanum is regarded as a spiritual or meditation oil. The oil was mixed with aromas of cypress patchouli and other oriental oils. Elizabethan pomanders contained labdanum as an ingredient.

Labdanum’s traditional medicinal properties have been studied and validated in scientific studies. For example, the species was observed to reduce the proliferation of Candida, S. aureus, and E. coli. (Barrajon-Catalan et al 2010) (More on the subject) It is regarded as a restorative, tonic, astringent, wound healer, and emmenagogue. Traditionally, the gum was used to treat diarrhea, dysentery, catarrh, and menstrual disorders.